I present a English precis of my text originally in Polish published in magazine edited by Paweł Łubowski in Poznań as "Arluk", 2019 nb 1-2. I like talking with Gabriela about art almost during e-mails conversations or in real world but it was twice. In future I want to write a long interpretation on her all art.

Gabriela Morawetz received a formal education in visual arts at the Academy of Fine Arts in Kraków. She studied graphic arts in the 1970s, when that field reached a peak of its development after the Second World War. Today its significance is more illusory. It’s often reanimated with digital techniques. However, they tend to produce an image of world that is more mechanical than manual. Morawetz works have been exhibited a number of times, recently in France – “Chambre d’(a)pesanteur” (Galerie Thessa Herold, Paris) and “In illo tempore” (La Galerie Sagot-Le Garpec, Paris) – and China – “Vanishing Deconstructions” (See+ Gallery, Beijing).
It’s worth mentioning that, in general, photography has a lot in common with, and seems to depend on, thinking associated with graphic arts. Many artworks by Gabriela Morawetz’s can be interpreted from a perspective of graphic arts development, intaglio techniques in which a black line often determines the image. In an email to me (09.05.19) she said the following about that: “Graphics are a way of perceiving the world. When I was fascinated by etching and aquatint, what I was looking at somehow transformed into a graphic image almost by itself. It was as if I was wearing some kind of special glasses that changed the colours to black and white tones. The darkness of these images referred not only to colours, but also to a mental sphere.
Graphics encompasses multilayered thinking and acting, even though the final result is a two-dimensional picture. From a preparation of a metal plate to a final stage of applying the paint we deal with multiple layers. It also applies to a mental sphere because the image in creation has to be seen in layers that will build it step by step. The process of digestion and leaving bright spots, as well as creating colour prints by a number of metal plates, e.g. in etching and aquatint, or separate colour screens in screen-printing or lithography, are also the classic topics of graphics.One could say that exactly this “thinking with layers” remained an important element of my work. Even though right now the most used medium is photography in a broad sense. So, from a formal point of view, imposing images with two or more surfaces, or composing them in a form of polyptychs, is often used”.Photo: 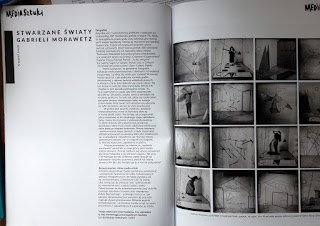